When I was growing up, there were two holidays for school children with parades; Rodeo and Fiesta. Naturally the teachers included a big build up to the holiday with appropriate decorations. Fiesta was much more colorful, so the class bulletin boards sported brilliant paper flowers and photos in tribute to the Battle of Flowers Parade. That was always the last Friday of Fiesta Week, and that was the day we got to miss school.
With the many-hued uniforms of marchers and the themed paper flower-studded floats, the Battle of Flowers Parade was a feast for the eye. Just about the whole city turned out to see it. When I was young, we did not have money to purchase seating that had been set up, especially not with us kids in the group. Many enterprising families had an uncle or a cousin or someone to go early and hold a spot on the family’s favorite street. They would get there before the “for pay” seats were set up and hold the space. Downtown along Houston Street was the best, but you had to wait for the parade to reach you. It started on Broadway and wound around to Houston Street near Market Square. We tried to avoid the sections where bands would pause playing before starting another song.

One year my aunt decided to invite us to the Battle of Flowers. It was a real treat because she paid for seats. She made a lunch for us to take: tuna sandwiches with onion in them on brown bread. Mama did not put onion in her tuna and she used white bread that she referred to as “light bread”, so this just added to the specialness. They were cut in half triangularly and wrapped in waxed paper. Auntie brought a jug with Jellcraft Picnic Punch and her metal tumblers. Each tumbler was a different color so we could tell our cups apart. Mama dropped us off at Chestnut and Houston, not far from Second Baptist Church. As we walked into the downtown area, we passed a house that was allowing cars to park in their yard for a fee. A young Latino boy stood outside the fence, waving cars in. A large family passed us carrying their folding chairs and ice chest. People brought chairs and crates and barrels to sit on, and maybe a rocking horse if there was a toddler in the group.

The thing about waiting for the parade to start was the sun. If you were not in shade, the searing sun beat down with no mercy. People would come by selling those pointy, rounded Asian style hats. Yellow or pink or blue strips would be woven in a circle which culminated in the pointed top. A rubber band held it around your chin. Usually about the time the vendors had come and left, someone would finish reading their Express newspaper. Clever people gathered the discarded paper and made sun hats by folding the newspaper several times like origami. It worked just as well and with multiple pages in the newspaper, everyone could have a hat. Or sometimes we just made paper fans by folding the paper back and forth on itself.

Between the walk to our spot, finding our seats, fending off sunstroke, and nibbling at our lunch, the anticipation was reaching critical. Soon, teasers would come down the route, police cars and policemen on motorcycles. We would fidget a bit more and then would come a color guard or a precision drill team. Eventually the parade would start in earnest and we would all stand with hands across our chests as the American flag passed by. Each time a flag came by everyone would stand to honor it.

What made the parade most exciting was if you knew someone who was marching. My aunt taught at Phillis Wheatley High School as a regular substitute and knew many of the marchers from that school. As a young person, this was the only school of color that marched. I was especially proud when the mighty Wheatley Lions passed, and especially when my brother was the drum major leading the band and my sister was a majorette. Everyone cheered or applauded when their favorite school or group passed by, especially if they were playing music or if the drill team or pep squad did a routine, or if baton twirlers did spectacular catches. All colors of people in San Antonio watched and enjoyed the parade together. And it all ended up with the world’s most decorated, beautiful gowns with the most exorbitantly embellished trains, worn by the queen and her court. Weary but satisfied at the end, we gathered our gear as the street cleaners paraded and headed back to meet our ride home. If we were really fortunate, we would get to do it all over again the next day for the night parade, the Fiesta Flambeau. 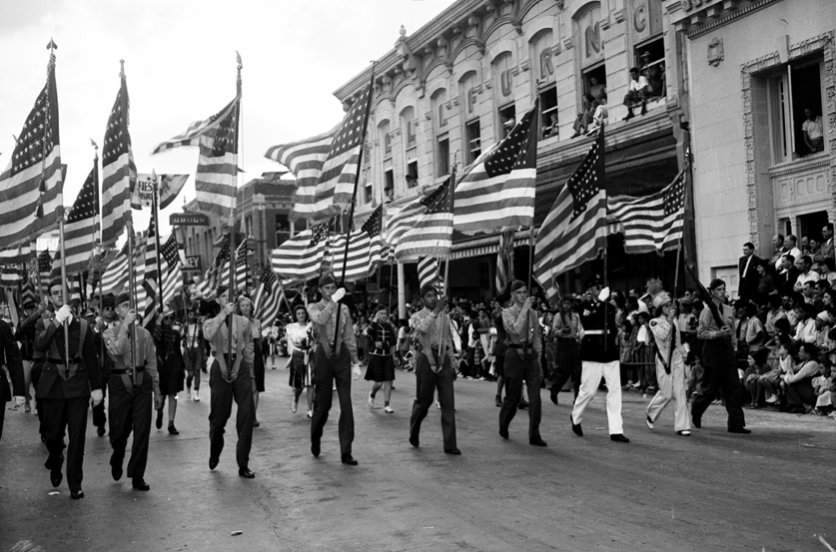