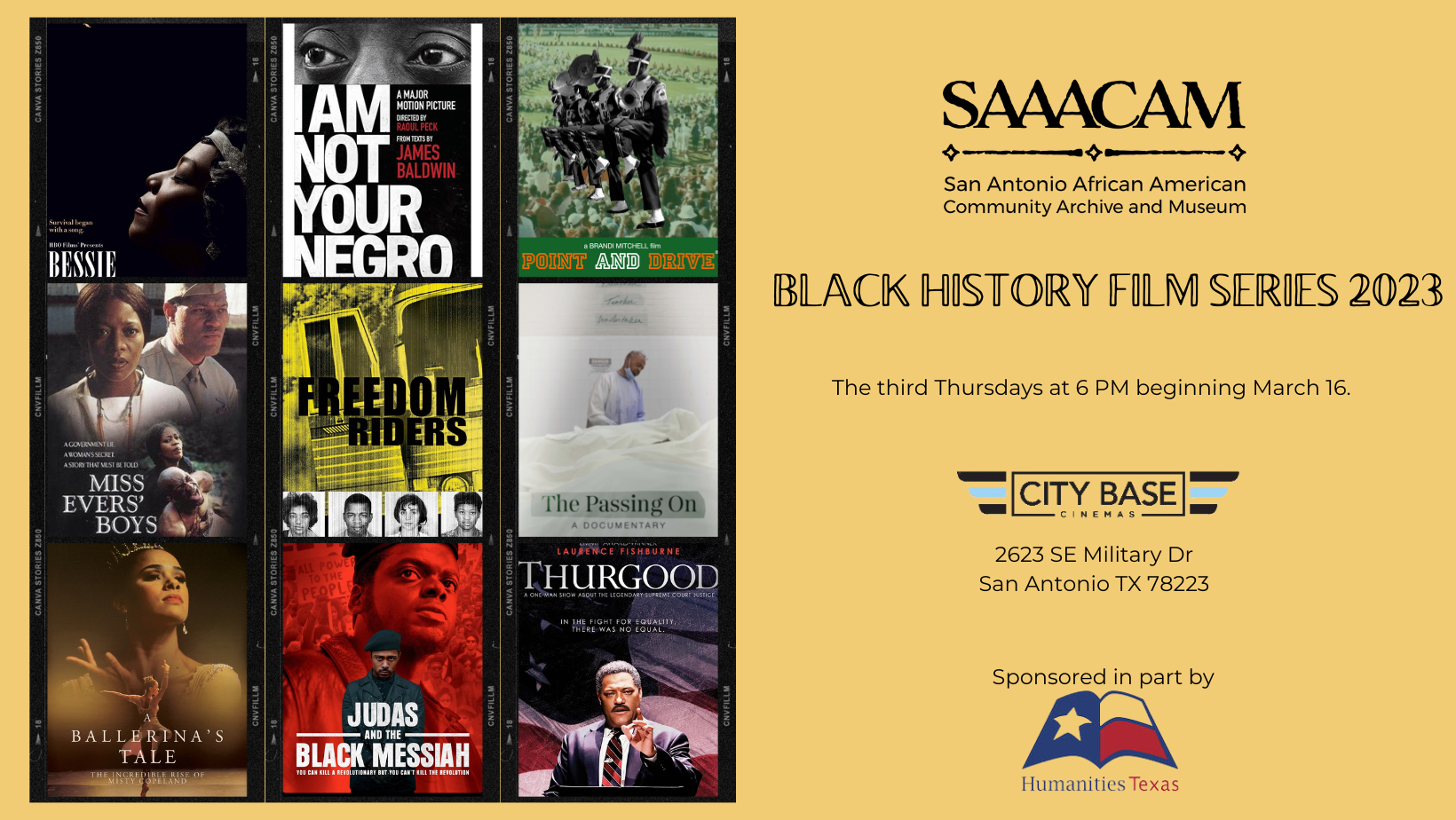 We are pleased to announce our 2023 film series and discussions.  This year we partner with City Base Cinemas to ensure your consistent comfort.  The theatre opens at 6:00 PM and showtime is at 6:30 PM for each screening. This series is sponsored in part by Humanities Texas.

ALL SCREENINGS ARE FREE BUT REGISTRATION IS REQUIRED. REGISTER HERE.

March 16, 2023 – Bessie.  Bessie is an HBO TV film about the American blues singer Bessie Smith, and focuses on hertransformation as a struggling young singer into “The Empress of the Blues”. The film is directed by Dee Rees, with a screenplay by Rees, Christopher Cleveland and Bettina Gilois. Queen Latifah stars as Smith, and supporting roles are played by Michael Kenneth Williams as Smith’s first husband Jack Gee, and Mo’Nique as Ma Rainey.

April 20, 2023 – Miss Evers’ Boys. Miss Evers’ Boys is an American made-for-television drama starring Alfre Woodard and Laurence Fishburne that first aired on February 22, 1997, and is based on the true story of the four-decade-long Tuskegee Syphilis Study. It was directed by Joseph Sargent and adapted by Walter Bernstein from the 1992 stage play of the same name, written by David Feldshuh. It received twelve nominations for the 1997 Primetime Emmy Awards, ultimately winning five, including Outstanding Television Movie and the President’s Award (awarded for programming that best explores social or educational issues).

May 18, 2023 – A Ballerina’s Tale. A Ballerina’s Tale is a 2015 documentary film revolving around the career of Misty Copeland,who serves as the narrator of the film as well as its subject. The film premiered on April 19, 2015 at the Tribeca Film Festival. It was released through video on demand on October 13, 2015, prior to opening in a limited release on October 14, 2015, by Sundance Selects.[2] A version of it, which is available on the PBS website, was also aired by PBS stations beginning in February 2016. The film received mostly positive reviews.

June 15, 2023 – I Am Not Your Negro. I Am Not Your Negro  is a 2016 documentary film and social critique film essay directed by Raoul Peck, based on James Baldwin’s unfinished manuscript Remember This House. Narrated by actor Samuel L. Jackson, the film explores the history of racism in the United States through Baldwin’s recollections of civil rights leaders Medgar Evers, Malcolm X, and Martin Luther King Jr., as well as his personal observations of American history. It was nominated for Best Documentary Feature at the 89th Academy Awards and won the BAFTA Award for Best Documentary. The film was internationally co-financed between Germany and the United States.

July 20, 2023 – Freedom Riders. The film chronicles the story behind hundreds of civil rights activists called Freedom Riders  that challenged racial segregation in American interstate transportation during the Civil Rights Movement. The  activist traveled together in small interracial groups and sat wherever they chose on buses and trains to compel  equal access to terminal restaurants and waiting rooms. They brought the ongoing practice of racial segregation  in the southern United States to national attention.

August 17, 2023 – Judas and the Black Messiah.The film is a 2021 American biographical crime drama film  about the betrayal of Fred Hampton (played by Daniel Kaluuya), chairman of the Illinois chapter of the Black  Panther Party in late-1960s Chicago, by William O’Neal (played by LaKeith Stanfield), an FBI informant. Jesse  Plemons, Dominique Fishback, Ashton Sanders, Darrell Britt-Gibson, Lil Rel Howery, Algee Smith, Dominique  Thorne, and Martin Sheen also star. The film is directed and produced by Shaka King, who wrote the screenplay  with Will Berson, based on a story by the pair and Kenny and Keith Lucas.

September 21, 2023 – Point and Drive.  The Story of Historically Black Colleges and Universities Marching Band Culture is the first and  only feature documentary to document, research, and share in rich detail the history of the marching band  culture infused with the personal stories from HBCU Marching Band alumni spanning 70 years.

October 19, 2023 – The Passing On. Three professions ushered former slaves from poverty to the American dream: preacher,  teacher, and undertaker. Now, renowned embalmer James Bryant puts his faith in a new generation to continue  the legacy of Black funeral homes in San Antonio, TX. However his young intern, Clarence Pierre, is conflicted  about his commitment due to the judgment he receives as a gay man in the African American community.

November 16, 2023 – Thurgood. – Prior to his appointment to United States Supreme Court Thurgood Marshall worked as a lawyer for the NAACP. This one man play starring Lawrence Fishburne tells the story of his role in the civil rights movement and the people that influenced him.